Start off your visit on the 10th (Mon): make a trip to Place de la Concorde, contemplate the long history of Eiffel Tower, then admire the landmark architecture of Arc de Triomphe, and finally admire the masterpieces at Louvre Museum.

To find ratings, photos, more things to do, and more tourist information, go to the Paris road trip planning website .

If you are flying in from France, the closest major airports are Paris-Orly Airport, Charles de Gaulle International Airport and Paris Beauvais Tillé Airport. Expect a daytime high around 9°C in February, and nighttime lows around 1°C. Wrap up your sightseeing on the 10th (Mon) to allow time to travel to Prague.
more less

On the 11th (Tue), explore the historical opulence of Prague Castle, don't miss a visit to Prague Astronomical Clock, then snap pictures at Charles Bridge, and finally get to know the fascinating history of Staromestske namesti.

To find photos, maps, and more tourist information, use the Prague sightseeing planner.

You can fly from Paris to Prague in 5 hours. Alternatively, you can drive; or do a combination of train and bus. Expect a bit cooler temperatures when traveling from Paris in February; daily highs in Prague reach 5°C and lows reach -1°C. Finish your sightseeing early on the 11th (Tue) so you can travel to Vienna.
more less

Start off your visit on the 12th (Wed): don't miss a visit to St. Stephen's Cathedral, admire the striking features of Schonbrunn Palace, and then admire nature's wide array of creatures at Schönbrunn Zoo. On the 13th (Thu), you'll have a packed day of sightseeing: see the interesting displays at The Hofburg, browse the exhibits of Belvedere Palace, and then examine the collection at Kunsthistorisches Museum Wien.

To find other places to visit, reviews, maps, and tourist information, read our Vienna sightseeing planner.

Traveling by flight from Prague to Vienna takes 3 hours. Alternatively, you can drive; or take a bus. Expect a daytime high around 5°C in February, and nighttime lows around -1°C. Cap off your sightseeing on the 13th (Thu) early enough to catch the train to Budapest.
more less

For other places to visit, maps, ratings, and other tourist information, go to the Budapest day trip planning site .

Traveling by train from Vienna to Budapest takes 2.5 hours. Alternatively, you can drive; or take a bus. In February in Budapest, expect temperatures between 7°C during the day and -1°C at night. Finish up your sightseeing early on the 14th (Fri) so you can travel to Rome.
more less

Kick off your visit on the 15th (Sat): explore the ancient world of Colosseum, get to know the fascinating history of Piazza Navona, then steep yourself in history at St. Peter's Basilica, then delve into the distant past at Pantheon, and finally admire the local landmark of Trevi Fountain.

To find other places to visit, reviews, more things to do, and other tourist information, go to the Rome travel itinerary planner.

You can fly from Budapest to Rome in 5 hours. Other options are to do a combination of flight and train; or drive. Prepare for a bit warmer weather when traveling from Budapest in February: high temperatures in Rome hover around 16°C and lows are around 5°C. Wrap up your sightseeing on the 15th (Sat) to allow time to travel to Saas-Fee.
more less 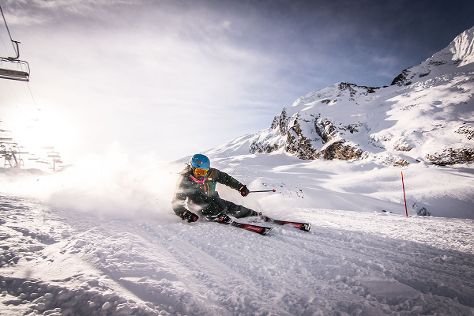 ©
Saas-Fee is the main village in the Saastal, or the Saas Valley, and is a municipality in the district of Visp in the canton of Valais in Switzerland. You've now added Ski Zenit to your itinerary. Explore the numerous day-trip ideas around Saas-Fee: Parasailing & Paragliding (in Interlaken) and Matterhorn Ski Paradise (in Zermatt). There's still lots to do: explore the striking landscape at Aletsch Glacier and take in the architecture and atmosphere at Baroque Church.

To find more things to do, other places to visit, photos, and tourist information, go to the Saas-Fee sightseeing planner.

The Route module can help you plan travel from Rome to Saas-Fee. Wrap up your sightseeing by early afternoon on the 18th (Tue) to allow enough time to travel back home.
more less

Things to do in Saas-Fee