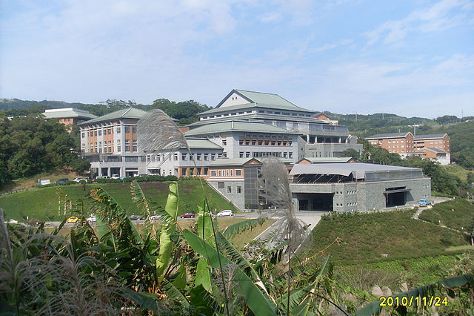 Xinbei, also known as New Taipei City, stands as a newly founded part of the wider Taipei metropolitan area, stretching up from the capital to the island's northern coast.

You've now added Dharma drum mountain to your itinerary. Start off your visit on the 27th (Fri): take in the dramatic natural features at Yeh Liu Geo Park, then don't miss a visit to Dharma drum mountain, and then head outdoors with Guan Yin Shan Trail. On the 28th (Sat), you'll have a packed day of sightseeing: admire the sheer force of Shifen Waterfall, then hike along Long Dong Wan Cape Trail, and then get a taste of the local shopping with Chiufen (Jiufen Old Street).

Singapore, Singapore to New Taipei is an approximately 8.5-hour flight. You can also do a combination of flight and train; or do a combination of car and ferry. When traveling from Singapore in December, plan for colder days and little chillier nights in New Taipei: temperatures range from 23°C by day to 18°C at night. Finish your sightseeing early on the 28th (Sat) so you can take a train to Taipei.
more less

Things to do in New Taipei

Situated in a basin between two mountain ranges, Taipei appeals to tourists with its blend of Asian cultures, living side by side amidst Japanese-era mansions and Taoist temples.

Taipei is known for shopping, museums, historic sites, nature, and zoos & aquariums. Your plan includes some of its best attractions: take an in-depth tour of National Palace Museum, make a trip to Elephant Mountain (aka Nangang District Hiking Trail), contemplate in the serene atmosphere at Hsing Tian Kong, and meet the residents at Taipei Zoo.

For other places to visit, reviews, traveler tips, and more tourist information, go to the Taipei trip planner .

Taipei is very close to New Taipei. In December, daytime highs in Taipei are 23°C, while nighttime lows are 18°C. Cap off your sightseeing on the 31st (Tue) early enough to go by car to Luodong.
more less

Things to do in Taipei

©
On the 1st (Wed), head outdoors with Lucky Art, then explore the activities along Meihua Lake, then take in the natural beauty of Qingshui Spring, and finally trek along Taiwan Beech National Trail.

Use Inspirock's suggestions to plan your Luodong trip and find the best activities and attractions for your vacation.

Getting from Taipei to Luodong by car takes about an hour. Other options: take a bus; or take a train. In December, daily temperatures in Luodong can reach 23°C, while at night they dip to 18°C. Wrap up your sightseeing by early afternoon on the 2nd (Thu) to allow time for travel back home.
more less

Things to do in Luodong