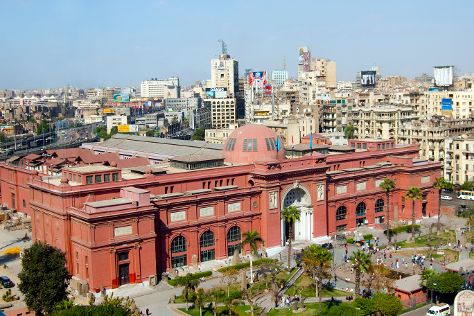 City of a Thousand Minarets

More than 20 million people call Cairo their home and, as soon as you set foot in the sprawling metropolis, it's evident they make it crowded and chaotic, but also exuberant and charming.

Your cultural itinerary includes sights like The Museum of Egyptian Antiquities and Saqqara (Sakkara) Pyramids. Explore hidden gems such as Step Pyramid of Djoser and Safaris. Change things up with these side-trips from Cairo: Giza (Pyramids of Giza, Pyramids of Dahshour, & more), Mastaba of Ti (in Saqqara) and Mit Rahina Museum (in Al Badrashin). There's much more to do: pause for some photo ops at Statue of Ramses II, contemplate the long history of Mosque of Sultan Al-Ashraf Barsbay, take in the exciting artwork at Oum El Dounia Gallery, and explore the different monuments and memorials at Tomb of Shah of Iran.

To find more things to do, reviews, and other tourist information, read our Cairo trip builder app .

If you are flying in from United States, the closest major airport is Cairo International Airport. In December in Cairo, expect temperatures between 69°F during the day and 54°F at night. Wrap up your sightseeing on the 26th (Sat) to allow time to travel back home.
more less

Things to do in Cairo

©
The Museum of Egyptian Antiquities