©
Varenna is a comune (municipality) on Lake Como in the Province of Lecco in the Italian region Lombardy, located about 60km north of Milan and about 20km northwest of Lecco.Varenna was founded by local fishermen in 769, and was later allied of the commune of Milan. You'll get in some beach time at Spiaggia Tranquilla and Riva Bianca Beach. Get some historical perspective at Castello di Vezio and Menaggio. You'll find plenty of places to visit near Varenna: Chiesa Santa Maria del Tiglio (in Gravedona), Bellagio (Basilica di San Giacomo, Azalea - Silk of Como, &more) and Santuario Della Madonna delle Grazie di San Martino (in Griante). Next up on the itinerary: hike along Sentiero del Viandante, pause for some serene contemplation at Chiesa di San Giorgio, explore the stunning scenery at Orrido di Bellano, and take in nature's colorful creations at Villa Carlotta.

Istanbul, Turkey to Varenna is an approximately 8.5-hour combination of flight and car. You can also drive. Traveling from Istanbul to Varenna, you'll gain 2 hours due to the time zone difference. Traveling from Istanbul in August, plan for slightly colder nights in Varenna, with lows around 20°C. Finish your sightseeing early on the 6th (Thu) so you can drive to Como.
more less

Things to do in Varenna 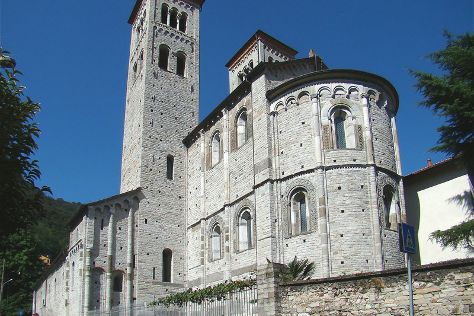 Known for its idyllic location on the shores of Lake Como and at the foot of the Alps, Como is one of northern Italy's most popular tourist destinations.

Kick off your visit on the 7th (Fri): contemplate in the serene atmosphere at Basilica di Sant'Abbondio, pause for some serene contemplation at Basilica di San Fedele, look for gifts at Libreria Ubik, then pause for some serene contemplation at Cathedral of Como (Duomo), and finally take a stroll around Broletto. Keep things going the next day: make a trip to Faro voltiano and then admire the striking features of Villa Olmo.

Traveling by car from Varenna to Como takes 1.5 hours. Alternatively, you can ride a ferry; or take a train. In August, daytime highs in Como are 33°C, while nighttime lows are 20°C. On the 8th (Sat), wrap the sightseeing up by early afternoon so you can travel back home.
more less

Things to do in Como