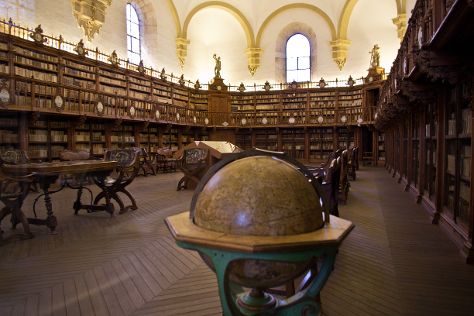 To see where to stay, maps, reviews, and more tourist information, refer to the Salamanca online trip itinerary planner.

Chicago, USA to Salamanca is an approximately 14.5- hour combination of flight and train. You can also do a combination of flight, train, and bus; or do a combination of train and flight. The time zone difference when traveling from Chicago to Salamanca is 7 hours. While traveling from Chicago, expect a bit warmer days and slightly colder nights in Salamanca, ranging from highs of 71°F to lows of 44°F. Wrap up your sightseeing on the 23rd (Sat) early enough to drive to Avila.
more less

©
Start off your visit on the 24th (Sun): delve into the distant past at The Walls of Avila, then contemplate in the serene atmosphere at Cathedral of Avila, and then don't miss a visit to The Four Posts.

To find more things to do, where to stay, ratings, and other tourist information, refer to the Avila trip planning website.

Getting from Salamanca to Avila by car takes about 1.5 hours. Other options: take a train; or take a bus. October in Avila sees daily highs of 69°F and lows of 43°F at night. Wrap up your sightseeing by early afternoon on the 24th (Sun) to allow time for travel back home.
more less