Your list of things to see and do now includes Schmetterlinghaus, Karlskirche, Danube Tower, and other attractions. Get some cultural insight at Schonbrunn Palace and St. Stephen's Cathedral. You'll explore the less-touristy side of things at Melk Abbey and Central Cemetery (Zentralfriedhof). Explore the numerous day-trip ideas around Vienna: Wachau Valley (in Joching), Johannesbachklamm (in Wurflach) and Burgruine Duernstein (in Durnstein). There's much more to do: take a stroll through Historic Center of Vienna, see the interesting displays at The Hofburg, look for all kinds of wild species at Biospharenpark Wienerwald, and admire the landmark architecture of Kaisergruft.

For ratings, where to stay, maps, and more tourist information, read our Vienna trip planner.

London, UK to Vienna is an approximately 5.5- hour flight. You can also do a combination of train and flight; or do a combination of train, bus, and flight. The time zone difference moving from Greenwich Mean Time (GMT) to Central European Standard Time (CET) is 1 hour. In May, daytime highs in Vienna are 22°C, while nighttime lows are 11°C. Finish your sightseeing early on the 6th (Wed) to allow enough time to travel to Mondsee.
more less

©
Mondsee is a town in the Vöcklabruck district in the Austrian state of Upper Austria located on the shore of the lake Mondsee. Kick off your visit on the 7th (Thu): see the interesting displays at Museum Mondseeland Und Osterreichisches Pfahlbaumuseum, take in the architecture and atmosphere at Basilika St. Michael, pause for some serene contemplation at Pfarrkirche Abtsdorf, take in the architecture and atmosphere at Pfarrkirche St. Georgen im Attergau, then examine the collection at Freilichtmuseum Stehrerhof, and finally identify plant and animal life at Puchheimer Au. Get ready for a full day of sightseeing on the 8th (Fri): get outside with Irrsee, tour the pleasant surroundings at Strandbad Perwang am Grabensee, and then contemplate the long history of Schloss Kammer.

To find more things to do, traveler tips, reviews, and other tourist information, go to the Mondsee trip builder.

You can drive from Vienna to Mondsee in 3 hours. Wrap up your sightseeing on the 9th (Sat) to allow time to drive to Salzburg.
more less

Things to do in Mondsee

You'll discover tucked-away gems like Schloss Hellbrunn and Franziskanerkirche. You'll explore and learn at Fortress Hohensalzburg Castle and Red Bull Hangar-7. You'll find plenty of places to visit near Salzburg: Wallfahrtskirche Maria Alm (in Maria Alm) and Naturdenkmal Seisenbergklamm (in Weissbach bei Lofer). There's much more to do: take in the spiritual surroundings of St. Peter's Abbey (Stift St. Peter), steep yourself in history at Mozarts Geburtshaus, examine the collection at Mozart Residence (Mozart Wohnhaus), and take in the architecture and atmosphere at St. Blasius Church.

To see other places to visit, where to stay, traveler tips, and more tourist information, read Salzburg trip maker website.

Salzburg is very close to Mondsee. In May, daily temperatures in Salzburg can reach 21°C, while at night they dip to 9°C. You'll have a few hours on the 12th (Tue) to wrap things up before traveling to Fuschl am See.
more less 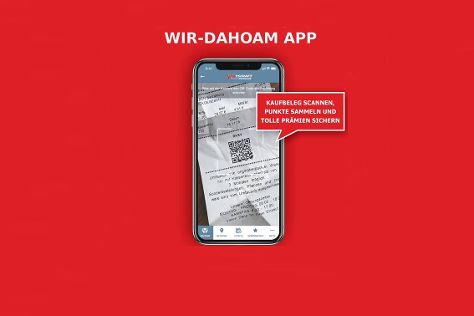 ©
Fuschl am See is an Austrian municipality in the district of Salzburg-Umgebung, in the state of Salzburg. On the 12th (Tue), get outside with Langlaufloipen Faistenau, contemplate the waterfront views at Naturstrandbad Fuschlsee, and then get outside with Fuschlsee Rundweg.

To see photos, where to stay, traveler tips, and tourist information, use the Fuschl am See trip planner.

Fuschl am See is just a short distance from Salzburg. In May in Fuschl am See, expect temperatures between 22°C during the day and 9°C at night. Wrap up your sightseeing on the 12th (Tue) to allow time to travel to St Gilgen.
more less

Things to do in Fuschl am See

©
Kick off your visit on the 13th (Wed): don't miss a visit to St Gilgen Mozartplatz, examine the collection at Puppenstubenmuseum Hintersee, pause for some serene contemplation at Pfarrkirche St. Gilgen, see the interesting displays at Musik Instrumenten Museum Der Volker, then get engrossed in the history at Heimatkundliches Museum St. Gilgen, and finally contemplate the waterfront views at Lake Wolfgang. Keep things going the next day: stop by Geschenke & Souvenir, take in the spiritual surroundings of Europakloster Gut Aich, steep yourself in history at Falkensteinkirche, then take in the architecture and atmosphere at Pfarrkirche St. Johannes der Taufer und St. Johannes der Evangelist, then look for all kinds of wild species at Jahreszeiten-Weg, and finally see the interesting displays at Museum Burg Golling.

To see ratings, other places to visit, photos, and more tourist information, go to the St Gilgen trip itinerary site.

St Gilgen is just a short distance from Fuschl am See. Cap off your sightseeing on the 14th (Thu) early enough to go by car to St. Wolfgang.
more less

Things to do in St Gilgen

Golling an der Salzach, Puppenstubenmuseum Hintersee
Find places to stay May 12 — 14:
Hotels on TripAdvisor
Homes on Airbnb
Highlights from your plan

St. Wolfgang is just a stone's throw from St Gilgen. On the 14th (Thu), you're off to Bad Ischl.
more less

Things to do in St. Wolfgang

To see where to stay, more things to do, and other tourist information, go to the Bad Ischl travel planner.

Bad Ischl is very close to St. Wolfgang. Wrap up your sightseeing by early afternoon on the 16th (Sat) to allow time for travel to Altaussee.
more less

Things to do in Bad Ischl

©
Altaussee is a municipality and spa town in the district of Liezen in Styria, Austria. On the 16th (Sat), fly down the slopes at Ski Resort Loser. Get ready for a full day of sightseeing on the 17th (Sun): get outside with Loser-Panoramastraße, head outdoors with Alpengarten Bad Aussee, then take an in-depth tour of Kammerhofmuseum Bad Aussee, and finally contemplate the waterfront views at Altausseer See.

To plan Altaussee vacation without wasting time, ask Inspirock to design an itinerary.

Altaussee is just a stone's throw from Bad Ischl. Wrap up your sightseeing on the 18th (Mon) to allow time to drive to Hallstatt.
more less

Things to do in Altaussee

Hinterstoder, Bad Aussee
Find places to stay May 16 — 18:
Hotels on TripAdvisor
Homes on Airbnb
Highlights from your plan

Get outdoors at Hallstatt-Dachstein - Salzkammergut Cultural Landscape and Hallstatter See. You'll explore the less-touristy side of things at Old Town and Badestrand Hallstatt. Venture out of the city with trips to Karkogel (in Abtenau) and Parasailing & Paragliding (in Werfenweng). And it doesn't end there: don't miss a visit to Hallstatt Skywalk "Welterbeblick", let the kids burn off some steam at Obertraun Bathing Area/Lakeside Recreation Area, go deep underground at Salzwelten, and take in the spiritual surroundings of Beinhaus, Karner, Ossuary.

You can drive from Altaussee to Hallstatt in an hour. Wrap up your sightseeing by early afternoon on the 23rd (Sat) to allow time for the car ride to Ramsau am Dachstein.
more less

©
Stadtturmgalerie and Castle Sommeregg are good opportunities to explore the local culture. Step out of the city life by going to Ursprungalm and Prebersee. Go for a jaunt from Ramsau am Dachstein to Metnitz to see Metnitzer Totentanzmuseum about 1h 50 min away.

To see more things to do, where to stay, other places to visit, and tourist information, you can read our Ramsau am Dachstein tour itinerary builder site.

You can drive from Hallstatt to Ramsau am Dachstein in 1.5 hours. Finish your sightseeing early on the 26th (Tue) so you can travel to Scheffau am Wilden Kaiser.
more less

Things to do in Ramsau am Dachstein

©
Eschew the tourist crowds and head to Kundler Klamm and Felsenkapelle. Escape the urban bustle at Filzalmsee and Hohe Salve. Change things up with these side-trips from Scheffau am Wilden Kaiser: Museum Bramberg (in Bramberg am Wildkogel), Felberturm Museum (in Mittersill) and Aggstein (in St Johann in Tirol).

For reviews, ratings, and more tourist information, you can read our Scheffau am Wilden Kaiser route tool.

Things to do in Scheffau am Wilden Kaiser 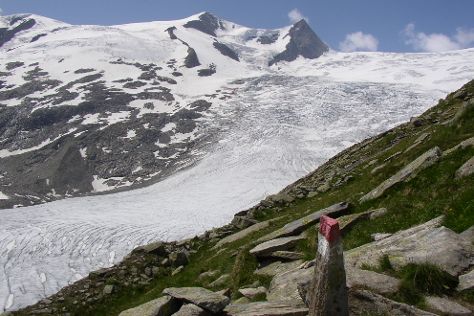 ©
Get in touch with nature at Gletscherweg Innergschloss and Wasserfall Hart. Museum-lovers will appreciate Augustinermuseum Rattenberg and Museum of Tyrolean Farmsteads. Get out of town with these interesting Aschau im Zillertal side-trips: Schloss Matzen (in Reith im Alpbachtal), Tiefenbachklamm (in Brandenberg) and Chiesetta di San Nicolo a Matrei (in Matrei in Osttirol).

You can drive from Scheffau am Wilden Kaiser to Aschau im Zillertal in an hour. Expect a daytime high around 23°C in May, and nighttime lows around 9°C. Wrap up your sightseeing on the 1st (Mon) to allow time to travel to Lech.
more less

Things to do in Aschau im Zillertal 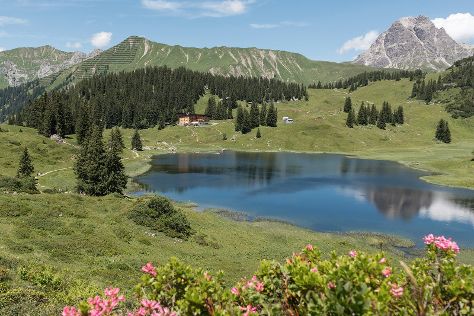 ©
Start off your visit on the 2nd (Tue): examine the collection at Bregenzerwaldbahn Museumsbahn, then tour the pleasant surroundings at Skirunde Der Weisse Ring, and then get outside with Geoweg Ruefikopf. Here are some ideas for day two: stroll through Lech-Oberlech Tobbagon Run, contemplate the waterfront views at Koerbersee, and then contemplate in the serene atmosphere at Kirche Sankt Nikolaus.

Find out how to plan Lech trip without stress by asking Inspirock to help create an itinerary.

Getting from Aschau im Zillertal to Lech by car takes about 2.5 hours. In June, plan for daily highs up to 27°C, and evening lows to 17°C. Wrap up your sightseeing on the 3rd (Wed) early enough to drive to Innsbruck.
more less

Things to do in Lech 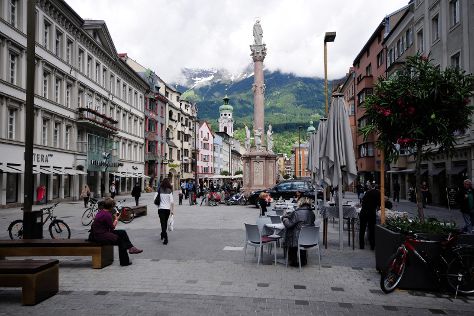 You'll explore and learn at Schloss Ambras Innsbruck and Tirol Panorama. Your inner history buff will appreciate Altstadt von Innsbruck and Jesuit Church. Change things up with a short trip to Friedensglocke in Mosern (about 34 minutes away). There's much more to do: admire the masterpieces at Tyrolean Folk Art Museum, see the interesting displays at Panorama and kaiserjager museum, take in the spiritual surroundings of Basilica Wilten, and pause for some serene contemplation at Dom zu St. Jakob.

Getting from Lech to Innsbruck by car takes about 2 hours. Other options: do a combination of taxi and train. Expect a daytime high around 28°C in June, and nighttime lows around 14°C. On the 7th (Sun), wrap the sightseeing up by early afternoon so you can travel back home.
more less