A city with character, Belfast remains a great place for a leisurely exploration, as it is still relatively undiscovered by foreign tourists, who usually opt to visit Dublin instead.

For photos, where to stay, and tourist information, refer to the Belfast day trip app.

Columbus, USA to Belfast is an approximately 14- hour combination of flight and bus. You can also fly; or do a combination of bus and flight. Traveling from Columbus to Belfast, you'll lose 5 hours due to the time zone difference. While traveling from Columbus, expect a bit cooler days and about the same nights in Belfast, ranging from highs of 57°F to lows of 48°F. Finish your sightseeing early on the 3rd (Mon) so you can travel to Edinburgh.
more less

Things to do in Belfast

Athens of the North

Surgeons' Hall Museums and Camera Obscura and World of Illusions will appeal to museum buffs. Eschew the tourist crowds and head to Palace of Holyroodhouse and Grassmarket. Next up on the itinerary: steep yourself in history at Dean Village, make a trip to The Real Mary King's Close, explore the different monuments and memorials at Greyfriars Kirk, and see the interesting displays at The Museum of Edinburgh.

To find photos, other places to visit, more things to do, and more tourist information, read our Edinburgh trip itinerary maker site.

Things to do in Edinburgh

Situated on the confluence of the rivers Ouse and Foss, York has witnessed an abundance of major political events throughout its two millennia of existence.

Kick off your visit on the 7th (Fri): see the interesting displays at York's Chocolate Story, take in the spiritual surroundings of Holy Trinity Church, admire the striking features of Merchant Adventurers' Hall, then indulge your thirst for a good beer at Brew York, then get the lay of the land with Walking tours, and finally sample the tasty concoctions at York Brewery. Keep things going the next day: examine the collection at The York Dungeon, brush up on your military savvy at The York Army Museum, get engrossed in the history at DIG, then wander the streets of York Shambles, and finally explore the galleries of Pandora's Box Antiques and Oddities.

Traveling by train from Edinburgh to York takes 2.5 hours. Alternatively, you can drive; or do a combination of flight and train. October in York sees daily highs of 59°F and lows of 45°F at night. Wrap up your sightseeing on the 8th (Sat) early enough to drive to Llandudno.
more less

Things to do in York

©
Llandudno is a seaside resort, town and community in Conwy County Borough, Wales, located on the Creuddyn peninsula, which protrudes into the Irish Sea. On the 9th (Sun), pause for some serene contemplation at Holy Trinity Church, pause for some serene contemplation at Saint Tudnos Church, then tee off at Great Orme Family Golf, then tour the pleasant surroundings at Angel Bay, and finally take a leisurely stroll along Llandudno Pier.

To see where to stay and other tourist information, refer to the Llandudno itinerary planner.

You can drive from York to Llandudno in 3 hours. Alternatively, you can take a train; or take a bus. In October in Llandudno, expect temperatures between 59°F during the day and 49°F at night. Finish up your sightseeing early on the 9th (Sun) so you can catch the train to London.
more less

Things to do in Llandudno

Let the collections at National Gallery and The Courtauld Gallery capture your imagination. Explore hidden gems such as Churchill War Rooms and Houses of Parliament. The adventure continues: take a stroll through Westminster, visit Holland Park, make a trip to Buckingham Palace, and contemplate the long history of Tower of London.

To see more things to do, photos, and more tourist information, use the London sightseeing planning tool.

You can take a train from Llandudno to London in 4.5 hours. Alternatively, you can drive; or do a combination of train and flight. In October, daily temperatures in London can reach 61°F, while at night they dip to 48°F. Wrap up your sightseeing on the 13th (Thu) to allow time to travel to Amsterdam.
more less

Appreciate the collections at Van Gogh Museum and Museum Ons' Lieve Heer op Solder. Step off the beaten path and head to Zaanse Schans and Body Worlds. When in Amsterdam, make a side trip to see Rotterdam Centraal Station in Rotterdam, approximately Rotterdam away. There's still lots to do: take a stroll through The Jordaan, see what you can catch with a fishing tour, get to know the fascinating history of Begijnhof, and explore the world behind art at Rijksmuseum.

For photos, reviews, other places to visit, and tourist information, go to the Amsterdam itinerary planning tool.

You can do a combination of train and flight from London to Amsterdam in 3.5 hours. Alternatively, you can take a train; or do a combination of train, bus, and flight. The time zone changes from Greenwich Mean Time to Central European Standard Time, which is usually a 1 hour difference. In October, plan for daily highs up to 59°F, and evening lows to 47°F. Finish your sightseeing early on the 17th (Mon) so you can take a train to Paris.
more less

Get outdoors at Ile Saint-Louis and Île de la Cité. Get some cultural insight at Musee Marmottan Monet and Musee Rodin. Change things up with these side-trips from Paris: Epernay (Mercier, Avenue de Champagne, &more). The adventure continues: appreciate the history behind Arc de Triomphe, ponder the world of politics at Hotel de Ville, explore the world behind art at Musee National des Arts Asiatiques - Guimet, and examine the collection at Musee Nissim de Camondo.

For other places to visit, more things to do, traveler tips, and tourist information, read Paris trip itinerary builder app.

Getting from Amsterdam to Paris by train takes about 3.5 hours. Other options: fly; or drive. October in Paris sees daily highs of 62°F and lows of 48°F at night. Finish your sightseeing early on the 21st (Fri) to allow enough time to travel to Nice.
more less

Epernay
Find places to stay Oct 17 — 21:
Hotels on TripAdvisor
Homes on Airbnb
Highlights from your plan

Let the collections at Palais Lascaris and Musee de la Photographie Charles Negre capture your imagination. Get some cultural insight at Vieille Ville and Cathedrale Saint-Nicolas a Nice. And it doesn't end there: shop like a local with Avenue Jean Medecin, admire the natural beauty at Jardin du Monastere de Cimiez, admire the local landmark of Fontaine du Soleil, and get outside with Promenade du Paillon.

To find ratings, other places to visit, maps, and tourist information, you can read our Nice route tool.

Getting from Paris to Nice by flight takes about 4 hours. Other options: take a train; or drive. Traveling from Paris in October, expect Nice to be a bit warmer, temps between 70°F and 58°F. Wrap up your sightseeing on the 24th (Mon) early enough to travel to Rome.
more less

Do some cultural sightseeing at Colosseum and Pantheon. Explore hidden gems such as Galleria Borghese and Le Domus Romane di Palazzo Valentini. Explore Rome's surroundings by going to Orvieto (Etruscan Museum "Claudio Faina", Orvieto Underground, &more). Next up on the itinerary: admire the local landmark of Trevi Fountain, take in the architecture and atmosphere at St. Peter's Basilica, contemplate the long history of Basilica Papale San Paolo fuori le Mura, and delve into the distant past at Palatine Hill.

To find where to stay, reviews, ratings, and other tourist information, read Rome itinerary builder.

Fly from Nice to Rome in 4.5 hours. Alternatively, you can do a combination of flight and train; or drive. Expect a daytime high around 73°F in October, and nighttime lows around 55°F. Finish your sightseeing early on the 28th (Fri) so you can take a train to Florence.
more less

You'll explore and learn at Florence Academy of Fine Arts and Pitti Palace. Satisfy your inner culture vulture at Cathedral of Santa Maria del Fiore and Museum of Opera of Saint Maria of Fiore. The adventure continues: don't miss a visit to Piazzale Michelangelo, snap pictures at Ponte Vecchio, contemplate in the serene atmosphere at Basilica San Miniato al Monte, and browse the exhibits of Museo Nazionale del Bargello.

To find maps, ratings, where to stay, and other tourist information, go to the Florence road trip planning site.

Getting from Rome to Florence by train takes about 2 hours. Other options: drive; or fly. Expect a daytime high around 71°F in October, and nighttime lows around 54°F. Wrap up your sightseeing on the 1st (Tue) early enough to take a train to Venice.
more less 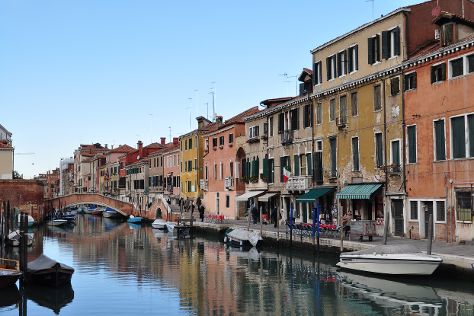 You'll discover tucked-away gems like Basilica di Santa Maria Gloriosa dei Frari and Dorsoduro. Gallerie dell'Accademia and Ca' Rezzonico will appeal to museum buffs. Next up on the itinerary: wander the streets of Cannaregio, take in the spiritual surroundings of Scuola Grande di San Rocco, don't miss a visit to Piazza San Marco, and admire the landmark architecture of Torre dell'Orologio.

To see traveler tips, more things to do, and other tourist information, go to the Venice online travel planner.

Getting from Florence to Venice by train takes about 2.5 hours. Other options: drive; or take a bus. Traveling from Florence in November, expect nights in Venice to be about the same, around 43°F, while days are a bit cooler, around 56°F. Wrap up your sightseeing on the 5th (Sat) to allow time to travel back home.
more less