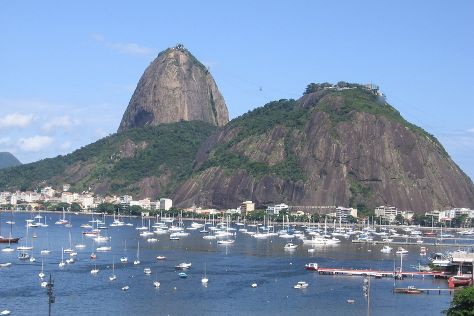 Bustling with samba music and all-night street parties, no city encapsulates the spirit of Brazil better than Rio de Janeiro.

Rio de Janeiro is known for beaches, nature, parks, museums, and nightlife. Your plan includes some of its best attractions: take in the awesome beauty at Sugarloaf Mountain, enjoy the sand and surf at Barra da Tijuca Beach, stroll through Pedra do Arpoador, and admire all the interesting features of Maracanã.

To see traveler tips, maps, and other tourist information, you can read our Rio de Janeiro online trip itinerary maker .

Sydney, Australia to Rio de Janeiro is an approximately 26-hour flight. You can also do a combination of bus and flight. The time zone difference moving from Australian Eastern Standard Time (New South Wales) to Brasilia Time is minus 13 hours. Expect somewhat warmer temperatures when traveling from Sydney in June; daily highs in Rio de Janeiro reach 30°C and lows reach 22°C. Finish up your sightseeing early on the 4th (Tue) so you can travel to Key Largo.
more less

Things to do in Rio de Janeiro

Diving Capital of the World

The northernmost island of the Florida Keys, Key Largo provides stunning scenery, a number of watersports opportunities, and plenty of areas to relax on vacation.

On the 5th (Wed), observe the fascinating underwater world at Dolphins Plus Marine Mammal Responder, get up close and personal with brilliant marine life at Island Dolphin Care, then look for all kinds of wild species at Florida Keys Wild Bird Rehabilitation Center, and finally explore the gorgeous colors at Spiegel Grove.

For other places to visit, more things to do, and more tourist information, go to the Key Largo online trip itinerary maker .

Things to do in Key Largo

Key West is known for adventure, wildlife, museums, nightlife, and nature. Your plan includes some of its best attractions: examine the collection at The Ernest Hemingway Home and Museum, look for all kinds of wild species at Key West Butterfly & Nature Conservatory, get up close to creatures of the deep with a dolphin and whale watching tour, and explore the galleries of Truman Little White House.

Traveling by car from Key Largo to Key West takes 2.5 hours. Alternatively, you can take a bus. June in Key West sees daily highs of 36°C and lows of 30°C at night. Cap off your sightseeing on the 8th (Sat) early enough to travel to Orlando.
more less

Things to do in Key West

Traveling by flight from Key West to Orlando takes 4.5 hours. Alternatively, you can drive; or take a bus. Expect slightly colder evenings in Orlando when traveling from Key West in June, with lows around 26°C. Wrap up your sightseeing on the 12th (Wed) early enough to travel to Paris.
more less

When in Paris, make a side trip to see Palace of Versailles in Versailles, approximately 48 minutes away. The adventure continues: explore the world behind art at Louvre Museum, shop like a local with Le Marais, take in the architecture and atmosphere at Basilique du Sacre-Coeur de Montmartre, and appreciate the history behind Arc de Triomphe.

Palace of Versailles
Find places to stay Jun 13 — 18:
Hotels on TripAdvisor
Homes on Airbnb
Highlights from your plan

A monumental number of archaeological relics from ancient Egypt remain evident in Luxor, the former capital of the New Kingdom.

To find more things to do, where to stay, and other tourist information, read Luxor tour itinerary maker app .

Traveling by flight from Paris to Luxor takes 10.5 hours. Alternatively, you can do a combination of flight and bus; or drive. The time zone changes from Central European Time (CET) to Eastern European Time (EET), which is usually a 1 hour difference. Plan for much warmer temperatures traveling from Paris in June, with highs in Luxor at 49°C and lows at 30°C. Cap off your sightseeing on the 20th (Thu) early enough to travel to Tokyo.
more less

Things to do in Luxor

©
Valley of the Kings

Tokyo is known for historic sites, parks, shopping, museums, and nightlife. Your plan includes some of its best attractions: admire the natural beauty at Shinjuku Gyoen National Garden, see the interesting displays at Edo-Tokyo Museum, don't miss a visit to Meiji Jingu Shrine, and have some family-friendly fun at Samurai Armor Photo Studio.

Use Inspirock's suggestions to plan your Tokyo trip and find the best activities and attractions for your vacation.

The Route module can help you plan travel from Luxor to Tokyo. The time zone difference moving from Eastern European Time (EET) to Japan Standard Time (JST) is 7 hours. While traveling from Luxor, expect colder days and a bit cooler nights in Tokyo, ranging from highs of 30°C to lows of 22°C. Finish your sightseeing early on the 24th (Mon) to allow enough time to travel to Cairns.
more less

Spend the 25th (Tue) among aquatic life with a scuba or snorkeling tour. Spend the 26th (Wed) wandering through the wild on a nature and wildlife tour. There's much more to do: trek along Esplanade Boardwalk, take in the waterfront at The Jack Barnes Bicentennial Mangrove Boardwalk, take in nature's colorful creations at Botanical Gardens, and view the masterpieces at Bones and Jones.

To see traveler tips, reviews, other places to visit, and tourist information, use the Cairns road trip planning site .

Traveling by flight from Tokyo to Cairns takes 9.5 hours. Alternatively, you can do a combination of train and flight. The time zone difference when traveling from Tokyo to Cairns is 1 hour. In June in Cairns, expect temperatures between 30°C during the day and 22°C at night. Finish your sightseeing early on the 27th (Thu) to allow enough time to take a bus to Port Douglas.
more less

A holiday in Port Douglas balances an activity-filled getaway with plenty of opportunities to relax, thanks to its proximity to the Great Barrier Reef and bustling beach life.

Spend the 28th (Fri) among aquatic life with a scuba or snorkeling tour. Spend the 30th (Sun) spotting exotic species with a safari tour. And it doesn't end there: identify plant and animal life at Hartley's Crocodile Adventures, make a trip to St Mary’s by The Sea chapel, and tour the pleasant surroundings at Wildlife Habitat Port Douglas.

To find other places to visit, ratings, more things to do, and more tourist information, you can read our Port Douglas trip planner.

You can take a bus from Cairns to Port Douglas in 1.5 hours. Other options are to drive; or take a shuttle. In June in Port Douglas, expect temperatures between 30°C during the day and 21°C at night. Wrap up your sightseeing on the 30th (Sun) to allow time to travel back home.
more less

Things to do in Port Douglas