©
Nendaz is a municipality in the district of Conthey in the canton of Valais in Switzerland.HistoryNendaz is first mentioned in 984 as Nenda. You'll find plenty of places to visit near Nendaz: Le Bouveret (Swiss Vapeur Parc & Aquaparc), Ermitage Notre-Dame de Longeborgne (in Bramois) and The Thermal Center (in Ovronnaz). There's still lots to do: head outdoors with Les Bisses de Nendaz, stroll around Place de la Planta, pause for some serene contemplation at Eglise Saint Nicolas, and step into the grandiose world of Valere Basilica.

Make your Nendaz itinerary with Inspirock to find out what to see and where to go.

Jakarta, Indonesia to Nendaz is an approximately 23.5-hour combination of flight and car. Due to the time zone difference, you'll gain 6 hours traveling from Jakarta to Nendaz. Cap off your sightseeing on the 28th (Mon) early enough to travel to Verbier.
more less

Things to do in Nendaz

©
Verbier is a village located in south-western Switzerland in the canton of Valais. Explore the numerous day-trip ideas around Verbier: Martigny (Barryland - Musee et Chiens du St-Bernard, Fondation Pierre Gianadda, & more), Lac d'Emosson (in Salvan) and Cascade de la Pissevache (in Vernayaz). Next up on the itinerary: join the crowd at Karting Extreme Verbier, fly down the slopes at Verbier 4 Vallees ski area, make a trip to Fort d'Artillerie de Champex, and pause for some serene contemplation at Abbaye de Saint-Maurice d'Agaune.

Drive from Nendaz to Verbier in 1.5 hours. Finish up your sightseeing early on the 1st (Fri) so you can go by car to Crans-Montana.
more less

Things to do in Verbier

©
Get out of town with these interesting Crans-Montana side-trips: Fondation Pierre Arnaud (in Lens), Leukerbad (Albinenleitern, Klettersteig Gemmi-Daubenhorn, & more) and Grand Bisse de Vercorin (in Vercorin).

For other places to visit, traveler tips, where to stay, and more tourist information, use the Crans-Montana trip itinerary builder tool .

Getting from Verbier to Crans-Montana by car takes about 2 hours. Wrap up your sightseeing on the 5th (Tue) to allow time to travel to Brig.
more less

Things to do in Crans-Montana 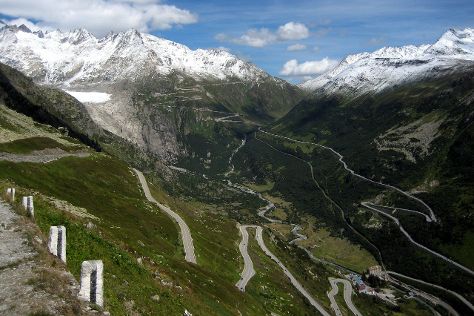 ©
Brig, officially Brig-Glis is a historic town and a municipality in the district of Brig in the canton of Valais in Switzerland.The current municipality was formed in 1972 through the merger of Brig, Brigerbad and Glis.Together with other Alpine towns Brig-Glis engages in the Alpine Town of the Year Association for the implementation of the Alpine Convention to achieve sustainable development in the Alpine Arc.Brig-Glis was awarded Alpine Town of the Year 2008.The official language of Brig is German, but the main spoken language is the local variant of the Alemannic Swiss German dialect.HistoryThe name Brig is derived from Briva, or "bridge." Its older houses are very Italian in appearance, while its most prominent buildings (Stockalper Palace, former Jesuits' college and Ursuline convent) all date from the 17th century, and are due to the generosity of a single member of the local Stockalper family, the baron Kaspar Stockalper.The prosperity of Brig is bound up with the Simplon Pass, so that it gradually supplanted the more ancient village of Naters opposite, becoming a separate parish (the church is at Glis, a few minutes from the town) in 1517. Explore Brig's surroundings by going to Ernen (Hangebrucke Furgangen-Muhlebach & Pfarrkirche Ernen), Rhone Glacier (in Gletsch) and Aletsch Arena (in Bettmeralp). Next up on the itinerary: take a memorable drive along Furka Pass, stroll through Chemin Pedestre de la Rampe Sud du Lotschberg, get interesting insight from Tours, and make a trip to Grimsel Pass.

Use Inspirock's suggestions to plan your Brig trip and find the best activities and attractions for your vacation.

You can drive from Crans-Montana to Brig in 1.5 hours. Expect a daytime high around 8°C in November, and nighttime lows around 0°C. Wrap up your sightseeing on the 9th (Sat) to allow time to take a train to Zermatt.
more less

Things to do in Brig

Zermatt is known for parks, museums, historic sites, classes, and nightlife. Your plan includes some of its best attractions: take in the awesome beauty at The Matterhorn, travel the rails with Gornergrat, enjoy some diversion at Clay Shoot Zermatt, and see the winter wonderland with Matterhorn Diamonds Ski School.

To find reviews, more things to do, where to stay, and other tourist information, read Zermatt itinerary site .

Take a train from Brig to Zermatt in 1.5 hours. Alternatively, you can do a combination of bus and train. Finish up your sightseeing early on the 17th (Sun) so you can travel back home.
more less