Known globally as the home of the country's largest independent film festival, Park City finds its roots as an old silver boomtown located on the slopes of the Wasatch Mountains, part of the Rocky Mountains.

New York City to Park City is an approximately 8.5-hour flight. You can also drive; or do a combination of bus, train, and shuttle. Traveling from New York City to Park City, you'll gain 2 hours due to the time zone difference. When traveling from New York City in November, plan for a bit cooler days and cooler nights in Park City: temperatures range from °F by day to °F at night. Wrap up your sightseeing on the 11th (Wed) early enough to drive to Evanston.
more less

Things to do in Park City

©
Evanston is a city in and the county seat of Uinta County, Wyoming, United States. On the 12th (Thu), contemplate the long history of Chinese Joss House Museum and then admire the majestic nature at Bear River State Park.

To see other places to visit, photos, where to stay, and other tourist information, you can read our Evanston online sightseeing planner.

Drive from Park City to Evanston in 1.5 hours. November in Evanston sees daily highs of °F and lows of °F at night. Cap off your sightseeing on the 12th (Thu) early enough to travel to Custer.
more less

Things to do in Evanston

Generally considered to be the oldest town established by European Americans in the Black Hills, Custer began as a mining town.

Start off your visit on the 13th (Fri): take in the dramatic natural features at Needles Eye Tunnel, thengo for a walk through Breezy Point Picnic Area, thentake a peaceful walk through Black Hills National Forest, and finally take in the exciting artwork at Insideout.

Explore your travel options from Evanston to Custer with the Route module. In November, plan for daily highs up to °F, and evening lows to °F. Finish your sightseeing early on the 13th (Fri) so you can drive to Rapid City.
more less

Things to do in Custer

Gateway to the Black Hills

South Dakota's second-largest city, Rapid City has for many years served as a gateway to the West.

Kick off your visit on the 14th (Sat): admire the sheer force of Bridal Veil Falls, thencruise along Spearfish Canyon Scenic Byway, thenfly down the slopes at Deer Mountain Ski Area, and finally view the masterpieces at Scott Jacobs Studio. On the 15th (Sun), you'll have a packed day of sightseeing: look for gifts at Professor Samuel's Portrait Emporium, look for all kinds of wild species at Bear Country USA, and then get a taste of the local shopping with Prairie Edge Trading Co. & Galleries.

Drive from Custer to Rapid City in an hour. Expect a daytime high around °F in November, and nighttime lows around °F. Finish your sightseeing early on the 15th (Sun) to allow enough time to drive to Sioux Falls.
more less

Things to do in Rapid City

©
Sioux Falls is the largest city in the U.S. Kick off your visit on the 16th (Mon): stroll around Falls Park, thendon't miss a visit to Michelangelo's David replica, and then trek along SculptureWalk & The Arc of Dreams Sioux Falls.

To see other places to visit, reviews, where to stay, and tourist information, refer to the Sioux Falls travel route planning site.

Things to do in Sioux Falls

Gateway to the West

At the confluence of two rivers, Winnipeg started out as a small trading post in an area inhabited by indigenous tribes for thousands of years before the European arrival.

Start off your visit on the 17th (Tue): get a sense of history and politics at Royal Canadian Mint, thenadmire the natural beauty at Assiniboine Park, and then stroll through Leo Mol Sculpture Garden.

To find reviews, photos, more things to do, and more tourist information, refer to the Winnipeg trip itinerary maker website.

Getting from Sioux Falls to Winnipeg by flight takes about 7 hours. Other options: drive. While traveling from Sioux Falls, expect slightly colder days and about the same nights in Winnipeg, ranging from highs of °F to lows of °F. Wrap up your sightseeing on the 17th (Tue) to allow time to travel to Saskatoon.
more less

Things to do in Winnipeg

Paris of the Prairies

Kick off your visit on the 18th (Wed): look for gifts at Midtown, see the interesting displays at Western Development Museum, and then browse the exhibits of Nutana Collegiate Memorial Art Gallery.

To see traveler tips, reviews, more things to do, and more tourist information, go to the Saskatoon trip maker app.

You can fly from Winnipeg to Saskatoon in 4.5 hours. Other options are to drive; or do a combination of train and bus. Traveling from Winnipeg in November, plan for a bit cooler nights in Saskatoon, with lows around °F. Finish up your sightseeing early on the 18th (Wed) so you can travel to Edmonton.
more less

Things to do in Saskatoon Though it suffers from frigid temperatures for much of the year, Edmonton offers a range of tourist activities for all four seasons.

On the 19th (Thu), stop by Greenland Garden Centre and then explore the wealth of natural beauty at Elk Island National Park.

For other places to visit, traveler tips, maps, and more tourist information, refer to the Edmonton trip itinerary maker.

Things to do in Edmonton 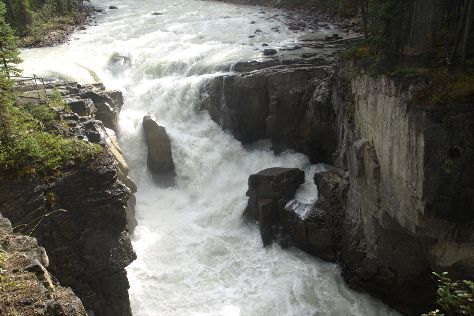 On the 20th (Fri), contemplate the waterfront views at Maligne Lake, take in breathtaking views at Sunwapta Falls, thenlook for gifts at Candy Bears' Lair, and finally explore the activities along Pyramid and Patricia Lakes.

To find maps, where to stay, other places to visit, and tourist information, refer to the Jasper National Park day trip planner.

You can drive from Edmonton to Jasper National Park in 4.5 hours. Alternatively, you can take a bus; or take a train. Expect a daytime high around °F in November, and nighttime lows around °F. Wrap up your sightseeing on the 20th (Fri) early enough to take a bus to Banff National Park.
more less

Things to do in Jasper National Park 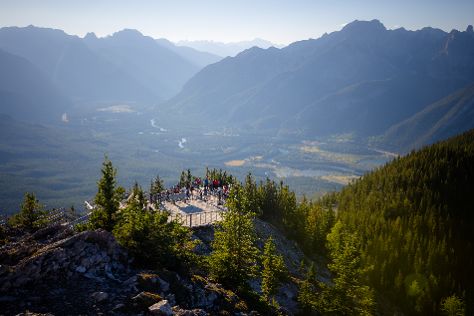 Among the world's oldest national parks, Banff National Park serves as a World Heritage-listed mecca for cyclists, hikers, skiers, bird-watchers, mountain climbers, and anyone else with a passion for exploring vast untouched wildernesses.

On the 21st (Sat), take in the awesome beauty at Sulphur Mountain, admire the sheer force of Bow Falls, thenfly down the slopes at SkiBig3 Adventure Hub, and finally look for gifts at Banff Candy Store. Here are some ideas for day two: take in the dramatic natural features at Natural Bridge, admire the sheer force of Takakkaw Falls, and then stroll through Lake Agnes.

Things to do in Banff National Park 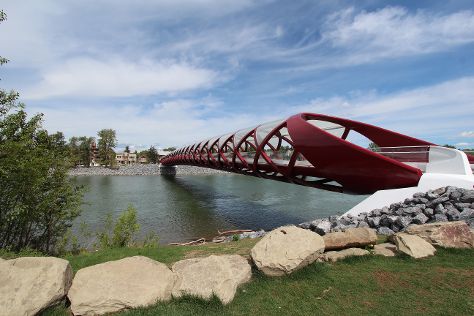 Known as the "Stampede City" thanks to its world-famous annual rodeo, Calgary remains a tale of two cities.

On the 23rd (Mon), grab your bike and head to Calgary Pathway System, explore the activities along Bow River, and then take a stroll around The New Central Library.

Things to do in Calgary

©
Helena is the capital city of the U.S. Kick off your visit on the 24th (Tue): explore the wealth of natural beauty at Gates of the Mountains.

For reviews, maps, ratings, and other tourist information, go to the Helena trip itinerary builder website.

Explore your travel options from Calgary to Helena with the Route module. Traveling from Calgary in November, you will find days in Helena are somewhat warmer (°F), and nights are about the same (°F). Finish up your sightseeing early on the 24th (Tue) so you can go by car to Butte.
more less

Things to do in Helena

Wildlife Nature Parks
Find places to stay Nov 24 — 25:
Hotels on TripAdvisor
Homes on Airbnb
Highlights from your plan
©
Gates of the Mountains

©
Butte is a city in, and the county seat of Silver Bow County, Montana, United States. Start off your visit on the 25th (Wed): explore the striking landscape at The Ringing Rocks, thentake some stellar pictures from Berkeley Pit, and then get out on two wheels at Copper Canyon Harley Davidson.

For reviews, where to stay, and more tourist information, go to the Butte route planner.

Getting from Helena to Butte by car takes about 1.5 hours. Traveling from Helena in November, expect slightly colder with lows of °F in Butte. Wrap up your sightseeing on the 25th (Wed) to allow time to travel to Salt Lake City.
more less

Things to do in Butte

Crossroads of the West

Utah's capital and most populous city, Salt Lake City boasts a small-town feel, big-city amenities, and plenty of nature on its doorstep.

Kick off your visit on the 26th (Thu): browse the different shops at City Creek Center, get a taste of the local shopping with Art at the Main Gallery, and then take in breathtaking views at Big Cottonwood Canyon.

To see reviews, traveler tips, where to stay, and other tourist information, use the Salt Lake City online tour planner.

The Route module can help you plan travel from Butte to Salt Lake City. Prepare for somewhat warmer weather when traveling from Butte in November: high temperatures in Salt Lake City hover around °F and lows are around °F. Cap off your sightseeing on the 26th (Thu) early enough to travel to Las Vegas.
more less

Things to do in Salt Lake City

Kick off your visit on the 27th (Fri): take a stroll through The Strip, admire the local landmark of Fountains of Bellagio, and then take in nature's colorful creations at Bellagio Conservatory & Botanical Gardens. Here are some ideas for day two: take in the awesome beauty at Mount Charleston and then explore the stunning scenery at Red Rock Canyon National Conservation Area.

To find photos, other places to visit, reviews, and other tourist information, go to the Las Vegas road trip planner.