Start off your visit on the 4th (Tue): walk around Momochi Seaside Park, see the interesting displays at Fukuoka Citizen’s Disaster Prevention Center, take in panoramic vistas at Fukuoka Tower, get lost in a book at Fukuoka City Public Library, thentour the pleasant surroundings at Ohori Park, and finally stroll around Maizuru Park. Get ready for a full day of sightseeing on the next day: don't miss a visit to Hakata Station, take in nature's colorful creations at Komyozen-ji Temple, contemplate in the serene atmosphere at Dazaifu Tenman-gu, thencontemplate in the serene atmosphere at Tenkai Inari Shrine, and finally take in nature's colorful creations at Kasuga Park.

To see maps, photos, where to stay, and tourist information, you can read our Fukuoka trip app.

Lisbon, Portugal to Fukuoka is an approximately 19-hour flight. The time zone difference when traveling from Lisbon to Fukuoka is 9 hours. April in Fukuoka sees daily highs of 23°C and lows of 13°C at night. Wrap up your sightseeing by early afternoon on the 6th (Thu) to allow time for the train ride to Kumamoto.
more less 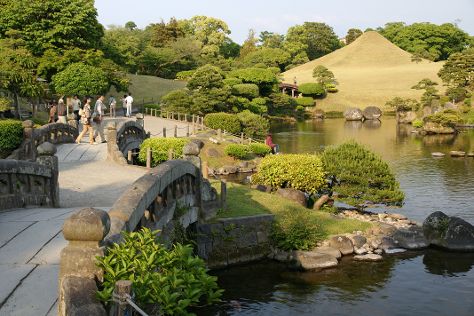 Kick off your visit on the 6th (Thu): take in the spiritual surroundings of Kato Shrine and then appreciate the extensive heritage of Kumamoto Castle. Here are some ideas for day two: browse the different shops at Shimotori Shotengai, admire the masterpieces at Contemporary Art Museum, Kumamoto, make a trip to Kumamon Square, thenstroll around Suizenji Jojuen Garden, thenget into the urban bustle at Kumamoto City International Center, and finally appreciate the history behind Kato Kiyomasa Statue.

To find other places to visit, maps, and tourist information, read our Kumamoto visit planner.

Take a train from Fukuoka to Kumamoto in 1.5 hours. Alternatively, you can drive; or take a bus. Expect a daytime high around 23°C in April, and nighttime lows around 12°C. Finish your sightseeing early on the 8th (Sat) so you can take a train to Kagoshima.
more less

On the 9th (Sun), make a trip to Sengan-en, don't miss a visit to Kagoshima Chuo Station, see the interesting displays at Museum of the Meiji Restoration, thenpause for some photo ops at Saigo Takamori Statue, and finally enjoy breathtaking views from Shiroyama Observatory.

For maps, more things to do, reviews, and more tourist information, use the Kagoshima itinerary maker tool.

Traveling by train from Kumamoto to Kagoshima takes 2 hours. Alternatively, you can drive; or take a bus. Expect a daytime high around 22°C in April, and nighttime lows around 12°C. Cap off your sightseeing on the 10th (Mon) early enough to catch the train to Nagasaki.
more less

©
Museum of the Meiji Restoration

On the 10th (Mon), wander the streets of Shinchi Chinatown, see the interesting displays at Nagasaki Museum of Traditional Performing Arts, take in nature's colorful creations at Glover Garden, steep yourself in history at Kapitan Room, thenexamine the collection at Dejima, and finally contemplate the long history of Nagasaki Peace Park. Get ready for a full day of sightseeing on the next day: ponder the world of politics at Nagasaki Prefectural Government Observation Deck, take your sightseeing to a higher altitude at Mt. Inasa, pause for some photo ops at Hypocenter of Atomic Bombing, thentake an in-depth tour of Nagasaki Atomic Bomb Museum, thensee the interesting displays at Nagasaki Peace Memorial Hall for the Atomic Bomb Victims, and finally stroll around Nakashimagawa Park.

Traveling by train from Kagoshima to Nagasaki takes 3.5 hours. Alternatively, you can do a combination of car and ferry; or take a bus. In April in Nagasaki, expect temperatures between 22°C during the day and 14°C at night. Finish up your sightseeing early on the 12th (Wed) so you can catch the train to Hatsukaichi.
more less

The city of Hatsukaichi developed from a small market town, frequented by passing samurais during the Edo period.

For traveler tips, photos, ratings, and other tourist information, refer to the Hatsukaichi trip itinerary planner.

You can take a train from Nagasaki to Hatsukaichi in 4 hours. Alternatively, you can drive; or do a combination of bus and train. In April in Hatsukaichi, expect temperatures between 22°C during the day and 13°C at night. Finish up your sightseeing early on the 14th (Fri) so you can go by car to Hiroshima.
more less

Things to do in Hatsukaichi

Discover how to plan a Hiroshima trip in just a few steps with Inspirock's itinerary builder.

Hiroshima is just a stone's throw from Hatsukaichi. In April in Hiroshima, expect temperatures between 22°C during the day and 13°C at night. You will have some time to spend on the 16th (Sun) before leaving for home.
more less