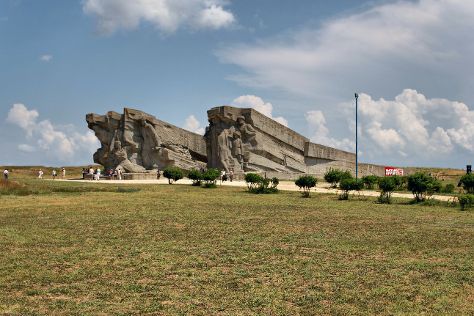 For ratings, more things to do, traveler tips, and other tourist information, go to the Kerch road trip planning app.

Memorial Complex in Honor of the Heroes Eltigen Marine

To see ratings, where to stay, and more tourist information, read our Feodosia trip website.

You can drive from Kerch to Feodosia in 1.5 hours. Another option is to take a train. The time zone difference moving from Moscow Standard Time (MSK) to Eastern European Standard Time (EET) is minus 1 hour. Finish your sightseeing early on the 10th (Fri) to allow enough time to drive to Sevastopol.
more less

Things to do in Feodosia

Change things up with these side-trips from Sevastopol: Foros Church of the Resurrection of Christ (in Foros), Bakhchisaray (Bakhchisaray Posts, Bakhchisaray Historical, Cultural and Archaeological Museum-Reserve, &more) and Balaklava Bay (in Balaklava). There's much more to do: look for all kinds of wild species at Cape Fiolent, take in the architecture and atmosphere at Chersonesus St.Volodymyr Cathedral, don't miss a visit to Admiral Nakhimov Monument, and appreciate the history behind Monument to the Flooded Ships in Sevastopol.

To find more things to do, ratings, traveler tips, and tourist information, go to the Sevastopol online attractions planner.

Getting from Feodosia to Sevastopol by car takes about 3 hours. Other options: take a train. Cap off your sightseeing on the 13th (Mon) early enough to go by car to Alushta Municipality.
more less

Bakhchisaray, Foros Church of the Resurrection of Christ, Balaklava Bay
Find places to stay Jul 10 — 13:
Hotels on TripAdvisor
Homes on Airbnb
Highlights from your plan 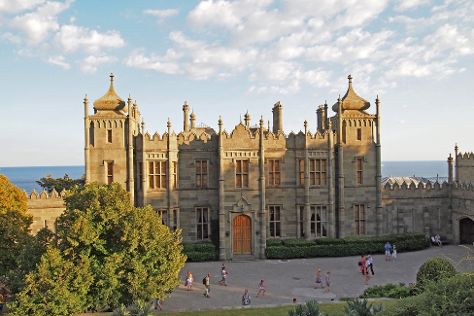 ©
Alushta City Municipality, officially "the territory governed by the Alushta city council", also known as Greater Alushta is one of the 25 regions of the Autonomous Republic of Crimea, a territory recognized by a majority of countries as part of Ukraine and incorporated by Russia as the Republic of Crimea. Venture out of the city with trips to Swallow's Nest (in Gaspra), Ai-Petri (in Koreiz) and Vorontsov Palace and Park complex (in Alupka). And it doesn't end there: admire the striking features of Livadia Palace and Park Museum-Reserve, take your sightseeing to a higher altitude at Ayu-Dag (Medved-Gora), explore the world behind art at Massandra Palace, and steep yourself in history at Chekhov House & Museum.

Traveling by car from Sevastopol to Alushta Municipality takes 2 hours. Alternatively, you can take a bus; or do a combination of train and bus. Finish your sightseeing early on the 17th (Fri) to allow enough time to travel back home.
more less