On your second day here, test the waters at a local thermal spa, step into the grandiose world of Vajdahunyad Castle (Vajdahunyadvar), and then examine the collection at House of Terror Museum.

To see more things to do, reviews, where to stay, and more tourist information, you can read our Budapest travel route site.

Start off your visit on the 9th (Thu): take in the local highlights with Walking tours, thenget to know the fascinating history of Staromestske namesti, thentake some stellar pictures from Prague Astronomical Clock, and finally contemplate the long history of Stary zidovsky Hrbitov. On your second day here, step into the grandiose world of Prague Castle, thenpause for some serene contemplation at St. Vitus Cathedral, and then take in the views from Charles Bridge.

To find traveler tips, maps, more things to do, and more tourist information, you can read our Prague trip itinerary planner.

Traveling by car from Budapest to Prague takes 5 hours. Alternatively, you can take a shuttle; or fly. Traveling from Budapest in April, you will find days in Prague are a bit cooler (°C), and nights are about the same (°C). Cap off your sightseeing on the 10th (Fri) early enough to go by car to Budapest.
more less 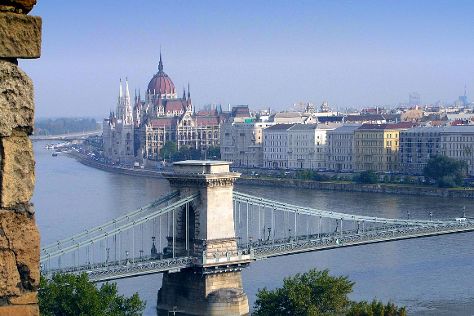 Kick off your visit on the 11th (Sat): get engrossed in the history at Hospital in the Rock Nuclear Bunker Museum, thenexplore the activities along Danube River, thenpick up some local products at Central Market Hall, and finally don't miss a visit to Shoes on the Danube Bank.

For where to stay and tourist information, you can read our Budapest trip itinerary planner.

Getting from Prague to Budapest by car takes about 5 hours. Other options: take a shuttle; or fly. Finish your sightseeing early on the 11th (Sat) to allow enough time to drive to Vienna.
more less

©
Shoes on the Danube Bank

Kick off your visit on the 12th (Sun): meet the residents at Schönbrunn Zoo, explore the historical opulence of Schonbrunn Palace, thencontemplate in the serene atmosphere at Chapel of St. Virgil, and finally pause for some serene contemplation at St. Stephen's Cathedral. On the next day, admire the striking features of Looshaus, thensee the interesting displays at The Hofburg, thenponder the world of politics at Rathaus, and finally admire the masterpieces at Kunsthistorisches Museum Wien.

To find where to stay, photos, maps, and other tourist information, use the Vienna travel itinerary planner.

Traveling by car from Budapest to Vienna takes 2.5 hours. Alternatively, you can fly; or take a train. April in Vienna sees daily highs of °C and lows of °C at night. Wrap up your sightseeing by early afternoon on the 14th (Tue) to allow enough time to drive to Budapest.
more less

Start off your visit on the 14th (Tue): steep yourself in history at Citadel. Here are some ideas for day two: learn about wildlife with up-close encounters at Budapest Zoo & Botanical Garden, thentake in the local highlights with Walking tours, and then don't miss a visit to Vaci Street.

To see other places to visit, more things to do, ratings, and tourist information, refer to the Budapest day trip planning app.

Traveling by car from Vienna to Budapest takes 2.5 hours. Alternatively, you can fly; or take a train. Wrap up your sightseeing on the 16th (Thu) early enough to travel back home.
more less