Place d'Armes has been added to your itinerary. Kick off your visit on the 17th (Fri): don't miss a visit to Barrio Grund, get to know the fascinating history of Le Chemin de la Corniche, explore the historical opulence of Palace of the Grand Dukes (Palais Grand-Ducal), contemplate in the serene atmosphere at Notre Dame Cathedral (Cathedrale Notre Dame), then don't miss a visit to Casemates du Bock, and finally take in the spiritual surroundings of Saint Michel's Church.

New York City, USA to Luxembourg City is an approximately 14-hour flight. You can also do a combination of bus and flight; or do a combination of bus, flight, and train. The time zone changes from Eastern Standard Time (EST) to Central European Time (CET), which is usually a 6 hour difference. Prepare for slightly colder weather when traveling from New York City in April: high temperatures in Luxembourg City hover around 56°F and lows are around 40°F. You'll have a few hours on the 18th (Sat) to wrap things up before traveling to Brussels.
more less

For more things to do, traveler tips, where to stay, and more tourist information, use the Brussels vacation tool .

Traveling by car from Luxembourg City to Brussels takes 2.5 hours. Alternatively, you can take a bus; or take a train. In April in Brussels, expect temperatures between 55°F during the day and 39°F at night. Finish up your sightseeing early on the 18th (Sat) so you can catch the train to Ghent.
more less 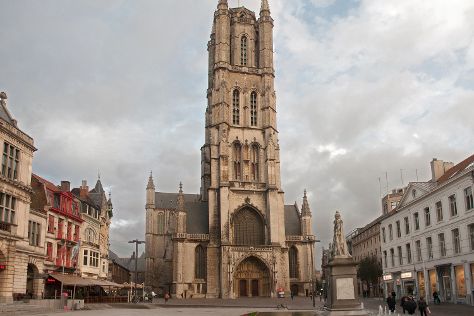 Ghent melds the fairy tale-like beauty of Bruges with its stunning Flemish architecture, while at the same time supporting a vibrant cafe and bar scene.

To see traveler tips, photos, more things to do, and tourist information, go to the Ghent online trip maker .

You can take a train from Brussels to Ghent in an hour. Alternatively, you can take a bus; or drive. In April, plan for daily highs up to 56°F, and evening lows to 40°F. On the 19th (Sun), you'll have the morning to explore before heading off to Bruges.
more less

Things to do in Ghent

The medieval town of Bruges centers around a canal, and the architecture of its historical district has made it a World Heritage Site.

Your day-by-day itinerary now includes Sint-Janshuismolen, Stadhuis and Minnewater Lake. On the 19th (Sun), contemplate the waterfront views at Minnewater Lake, admire the striking features of Sint-Janshuismolen, don't miss a visit to The Markt, appreciate the history behind Jan Breydel and Pieter de Coninck Monument, then admire the striking features of Belfry of Bruges, and finally take in the spiritual surroundings of Basilica of the Holy Blood.

For where to stay, photos, other places to visit, and tourist information, you can read our Bruges itinerary planning website .

Bruges is just a stone's throw from Ghent. In April, plan for daily highs up to 56°F, and evening lows to 40°F. Wrap up your sightseeing on the 19th (Sun) early enough to take a train to Ghent.
more less

Things to do in Bruges

©
Basilica of the Holy Blood 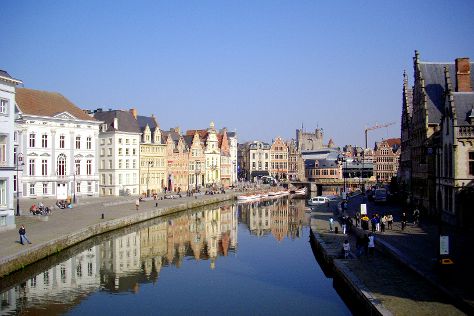 ©
Your list of things to see and do now includes St Michael's Bridge, St. Nicholas' Cathedral, Sint-Jacobskerk, and other attractions. On the 20th (Mon), pause for some serene contemplation at St. Nicholas' Cathedral, contemplate in the serene atmosphere at Sint-Jacobskerk, then take a leisurely stroll along Graslei and Korenlei, then don't miss a visit to Ghent City Center, and finally take in the views from St Michael's Bridge.

Make your Ghent itinerary with Inspirock to find out what to see and where to go.

Ghent is very close to Bruges. You will have some time to spend on the 20th (Mon) before leaving for Antwerp.
more less

Things to do in Ghent 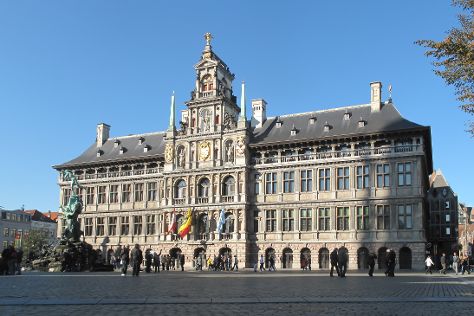 Its reputation as a business-centric city distracts many visitors from the real draws of Antwerp: its historical sites, architectural beauty, and lively culture.

Antwerpen-Centraal has been added to your itinerary. On the 20th (Mon), admire the landmark architecture of Antwerpen-Centraal, pause for some serene contemplation at Cathedral of Our Lady, then don't miss a visit to Grote Markt, then wander the streets of Zurenborg, and finally get to know the fascinating history of Cogels Osylei.

To see where to stay, ratings, reviews, and more tourist information, read our Antwerp itinerary planner .

Getting from Ghent to Antwerp by train takes about an hour. Other options: drive; or do a combination of train and bus. In April in Antwerp, expect temperatures between 59°F during the day and 38°F at night. Finish your sightseeing early on the 20th (Mon) to allow enough time to drive to Delft.
more less

Things to do in Antwerp

©
Cathedral of Our Lady

Delft is a town rich in tradition and provides a lovely alternative to the bustling more popular cities.

To see ratings, maps, other places to visit, and more tourist information, go to the Delft tour planner.

Traveling by car from Antwerp to Delft takes 1.5 hours. Alternatively, you can take a train; or take a bus. April in Delft sees daily highs of 56°F and lows of 39°F at night. You will have some time to spend on the 21st (Tue) before leaving for Kinderdijk.
more less

Things to do in Delft

©
Kinderdijk is a village in the Netherlands, belonging to the municipality of Molenwaard, in the province South Holland, about 15km east of Rotterdam. You've now added World Heritage Kinderdijk to your itinerary. On the 21st (Tue), steep yourself in history at World Heritage Kinderdijk, don't miss a visit to City Hall, then take in the architecture and atmosphere at Maria van Jessekerk, and finally admire the striking features of Maria Van Jesse Church.

Traveling by car from Delft to Kinderdijk takes an hour. Alternatively, you can do a combination of train and bus; or take a bus. Expect a daytime high around 56°F in April, and nighttime lows around 39°F. Wrap up your sightseeing on the 21st (Tue) to allow time to drive to Delft.
more less

Things to do in Kinderdijk

Traveling by car from Kinderdijk to Delft takes an hour. Alternatively, you can do a combination of bus and train; or take a bus. On the 22nd (Wed), wrap the sightseeing up by early afternoon so you can take a train to The Hague.
more less

Things to do in Delft

few
hours
The Hague, The Netherlands

Judicial Capital of the World

Known as the "judicial capital of the world," The Hague is the center for everything official in the Netherlands: the home of the Dutch government and parliament, the workplace of the King and Queen, and the base of many international affairs such as the International Court of Justice and the International Criminal Court.

To find maps, traveler tips, reviews, and tourist information, use the The Hague travel planner .

The Hague is very close to Delft. Expect a daytime high around 56°F in April, and nighttime lows around 39°F. On the 22nd (Wed), you're off toLisse.
more less

Things to do in The Hague

Your day-by-day itinerary now includes The Clog Experience, Edams Museum, Cheese Factory Volendam, and other attractions you added. Popular historic sites such as Anne Frank House and Stadsgevangenis van Enkhuizen uit 1612 are in your itinerary. Your cultural itinerary includes sights like The Jordaan and Singel. Change things up with a short trip to Keukenhof in Lisse (about 34 minutes away). There's still lots to do: cast your line with a fishing tour, tour on your own time with Bike Is Ready, walk around Vondelpark, and contemplate the waterfront views at Emperor's Canal (Keizersgracht).

To see photos, traveler tips, other places to visit, and other tourist information, you can read our Amsterdam trip planner.

Traveling by bus from The Hague to Amsterdam takes an hour. Alternatively, you can take a train; or drive. Expect a daytime high around 56°F in April, and nighttime lows around 40°F. You will have some time to spend on the 26th (Sun) before leaving for home.
more less