Eupatoria or Yevpatoria is a city of regional significance in Crimea, a territory disputed between Ukraine (as the Autonomous Republic of Crimea) and Russia (as the Republic of Crimea) after Russia annexed Crimea in March 2014. On the 2nd (Tue), pause for some serene contemplation at Cathedral of St. Nicholas, pause for some photo ops at Suvorov Redoubt, contemplate in the serene atmosphere at Juma-Jami Mosque, take in the spiritual surroundings of Dervish Monastery, then get engrossed in the history at Odun-Bazar Kapusi, and finally take in the spiritual surroundings of Karaite Kenesa of Yevpatoria. On the 3rd (Wed), you'll have a packed day of sightseeing: don't miss a visit to St. Ilia Temple, make a trip to Gorky Embankment, and then admire nature's wide array of creatures at Aquarium in Yevpatoriya.

To see ratings, more things to do, other places to visit, and more tourist information, read our Yevpatoriya day trip tool .

Belgrade, Serbia to Yevpatoriya is an approximately 12-hour combination of flight and bus. You can also do a combination of flight, train, and bus; or drive. The time zone changes from Central European Time to Eastern European Time, which is usually a 1 hour difference. Finish your sightseeing early on the 3rd (Wed) to allow enough time to drive to Khodzha Sala.
more less

Things to do in Yevpatoriya 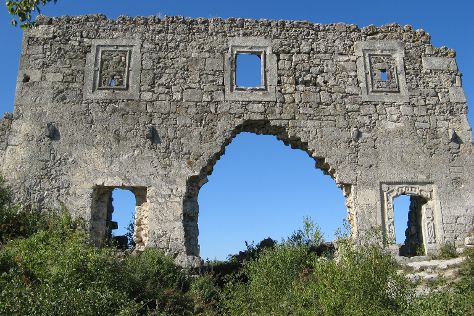 Things to do in Khodzha Sala

©
Kerch is a city of regional significance on the Kerch Peninsula in the east of the Crimea. On the 6th (Sat), pause for some serene contemplation at Church of St. John the Baptist, take in panoramic vistas at Glory Obelisk at the Mountain Mitridat, make a trip to Mitridatskaya Lestnitsa, contemplate the long history of Fortress Kerch, then contemplate the long history of Adzhimushkay Quarry, and finally make a trip to Royal Kurgan.

For where to stay, ratings, maps, and other tourist information, use the Kerch trip itinerary maker app .

Getting from Khodzha Sala to Kerch by car takes about 4.5 hours. Other options: do a combination of taxi and bus; or do a combination of car and train. The time zone difference when traveling from Khodzha Sala to Kerch is 1 hour. In October, daytime highs in Kerch are 20°C, while nighttime lows are 9°C. Finish your sightseeing early on the 6th (Sat) so you can drive to Kurortne.
more less

©
Start off your visit on the 7th (Sun): contemplate the long history of Hill Junge, then take in the awesome beauty at Mountain Voloshin, then take your sightseeing to a higher altitude at Karadag Natural Reserve, and finally take in the dramatic natural features at Golden Gate (Devil's Gate).

To find more things to do, ratings, maps, and more tourist information, refer to the Kurortne tour itinerary maker website .

Traveling by car from Kerch to Kurortne takes 2 hours. Alternatively, you can do a combination of train and taxi; or do a combination of bus and taxi. The time zone difference moving from Moscow Standard Time (MSK) to Eastern European Time (EET) is minus 1 hour. Finish your sightseeing early on the 7th (Sun) so you can drive to Yalta.
more less

Things to do in Kurortne

Koktebel
Find places to stay Oct 6 — 7:
Hotels on TripAdvisor
Homes on Airbnb
Highlights from your plan 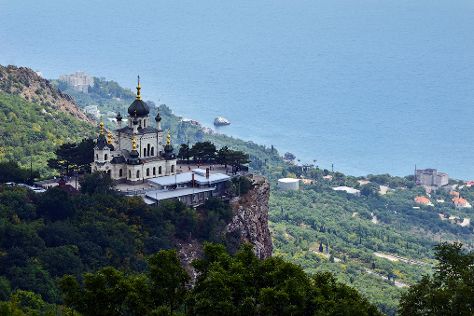 To find more things to do, photos, other places to visit, and more tourist information, read Yalta vacation planning tool .

Things to do in Yalta

Church of St. Archangel Mikhail, Foros Church of the Resurrection of Christ, Ayu-Dag (Medved-Gora)
Find places to stay Oct 7 — 10:
Hotels on TripAdvisor
Homes on Airbnb
Highlights from your plan

©
Foros Church of the Resurrection of Christ